Cope students enchanted by the magic of Garner Holt Productions 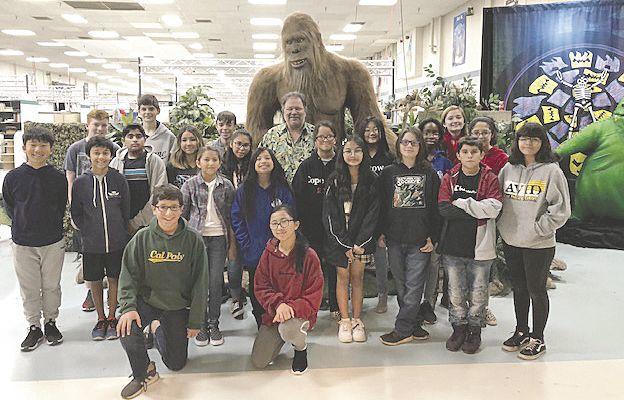 Kyra Roghair, Cope’s theater adviser and art teacher, received a Margaret Clark Art Education Enrichment Fund grant from the Redlands Art Association to fund the trip. The grant is named in honor of Margaret Clark, a former instructor at the University of Redlands for 26 years who believed in emphasizing to future teachers the importance of promoting the arts in education. She co-founded the Redlands Art Association in 1964, which offers programs to supplement children’s art education.

“I was inspired to see somebody who was so successful pursuing his dreams. It makes me feel like I can do it, too.”

Upon arriving at the Garner Holt Productions, students went directly to a classroom where they learned about how Garner Holt was inspired at a young age to delve into animatronics after watching a Disney special on the Haunted Mansion. As a teenager, he began hosting haunted houses in Inland Empire malls. His business has since grown to be the world’s largest animatronics production company. The company moved operations to Redlands earlier this year.

Holt surprised the students with an appearance and said he hoped the tour would spark their imagination so they would “be creative and imaginative” in their future endeavors.

Students were given materials to create a “brushtronic” bug and then toured the production facility where they were able to view how animatronic characters are made. Starting in the design space, students saw concept art, the sculpting studio and the welding and hydraulics area. They then saw how the animatronics are installed with motors and inner mechanisms.

At the tour’s conclusion, students were shown the space in which the skin, hair and fur is added to the figures. Jobs at Garner Holt vary, ranging from 3D modeling to voice acting to script writing to programming.

Students were treated to a short production of Abraham Lincoln — the world’s most expressive animatronic head. Students left with a sculpting kit so they could continue creating at home.

Debra Cheng, an advanced art student, said, “I was inspired to see somebody who was so successful pursuing his dreams. It makes me feel like I can do it, too.”

Roghair said, “I was so appreciative of both the Redlands Art Association and Garner Holt. My goal was to show creative students that there are job possibilities where they can use their artistic intelligence.

Who knew that in Redlands there is an animatronics production company that is known worldwide?

Written by Margaret Male for the Redlands Community News