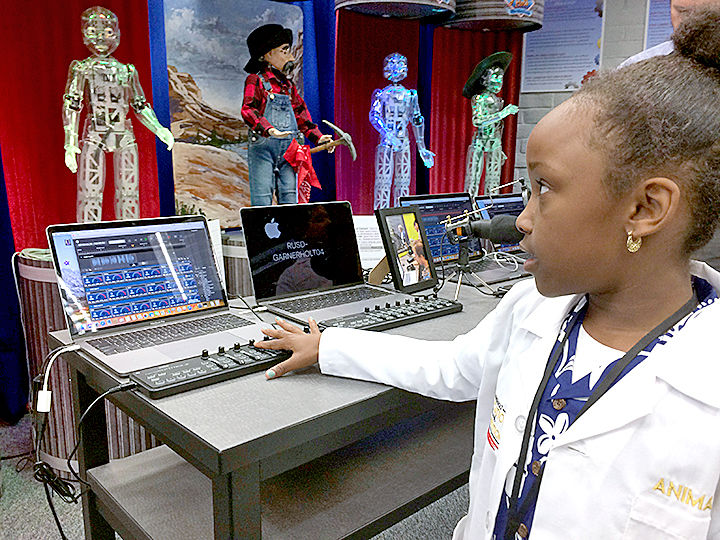 The AniMakerSpace is a shop filled with the variety of tools and technologies associated with the creation of animatronics but capable of inspiring students into a variety of career fields.

Dozens of educators, animatronics professionals and students attended the chain-cutting ceremony in support of the district’s focus on “enhanced learning through innovation.”

County Superintendent Ted Alejandre applauded the partnership between the district and the San Bernardino-based (now in Redlands) company responsible for much of the Disney theme parks’ famous attractions.

We’re trying to bring out the excitement of robotics and electronics to the schools and provide the machines and equipment not often seen at schools,

Garner Holt, founder of Garner Holt Productions, shared that shop classes changed his life and formed his future, and that he is happy to help support the district in expanding its shop experiences for students.

After becoming enamored with animatronics during a trip to Disneyland, Holt tested out of Pacific High School and, at 17, started his corporation. It is now the world’s largest animatronics company.

The workspace was modeled after the animatronics program created at Bing Wong Elementary in Highland in partnership with Ryan Rainbolt, then principal now Garner Holt Production’s Director of Education.

“We’re trying to bring out the excitement of robotics and electronics to the schools and provide the machines and equipment not often seen at schools,” Holt said.

“We started to look at the big picture, and animatronics connect to robotics. That’s what we’re all hearing about, robotics. Pretty soon the kids today will be standing next to robots in the workplace.

Holt added that animatronics can also connect students to every career imaginable, because not every student will be interested in electronics.

The variety of the AniMakerSpace’s equipment reflect this with sewing machines, clay modeling, a CNC mill, laser cutter, vacuum former, 3D printer, airbrushes and the computer controlled animatronic figures themselves. The writing of scripts and vocal performances also incorporate theater arts to the shop space.

Written by Hector Hernandez Jr. for the Redlands Community News